Damian Wilson’s new album, Limehouse to Lechlade, will be out on November 12th on LP, CD and download/streaming format. The album, produced by Andrew Holdsworth, is Damian’s first full-length solo album since 2016’s Built For Fighting. It contains 13 original songs and might be Damian's most eclectic work yet. Known for his exploration into different genres, the songs on the album range from folk-rock to power pop, with the occasional Floydian guitar solo. The title, Limehouse to Lechlade, refers to the navigable length of the River Thames heading upstream from central London to the Cotswolds. Damian loved his many years living on river boats, and traveling the River Thames is particularly special to him. The album has an underlying concept throughout that represents our journey through life.

Limehouse to Lechlade was recorded during one of the most challenging periods for the music industry. Damian believes that music is about connecting with people, and after this period of separation from each other he is looking forward to reconnecting with his audience on the road; starting with shows in the UK, Netherlands and Germany in November/December 2021.

Also available for pre-order, is the new and updated edition of 'Words Are So Misleading'; the complete Damian Wilson songbook.

This songbook contains the lyrics to all the songs from Damian Wilson’s solo catalogue and all the songs Damian has written for bands such as Headspace, Threshold, Landmarq and more.

It comes with a bonus DVD, Damian Wilson - Live in Berlin; an 8 song acoustic set recorded at the Columbiahalle in November 2019. Pre-order here. 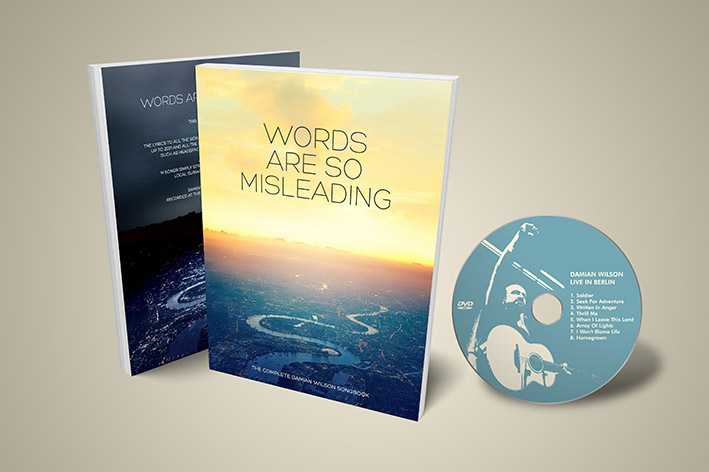 All album pre-orders include the digital album. You get 1 track now plus the complete album the moment it’s released.

* Get the new Damian Wilson album PLUS Adam Wakeman's new piano album 'A Handful Of Memories'. Both albums will be released on November 12th.